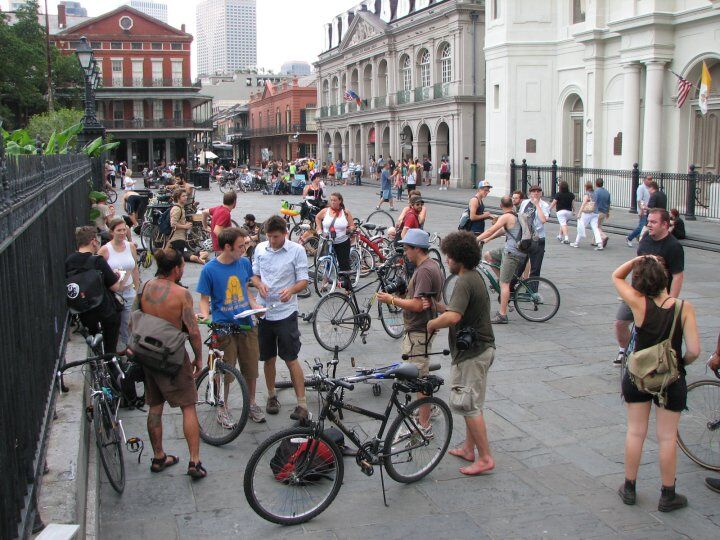 Critical Mass is a monthly bicycle ride to assert cyclists' right to the road, have fun and promote bikes as a form of transportation.

Critical Mass New Orleans meets the last friday of every month at 6 PM in front of the Jackson Square cathedral.

Tell your Friends, Bring your Mom, Bring a date.

In New Orleans, more than 1% of people ride to work on bicycle (compared to a national average of 0.04%). Also, more than 25% of residents simply do not have a car. Bicyclists deserve to feel safe on city streets and not as targets of motorist aggression and ignorance. New Orleans, as an Island Nation inside the United States, must be a leader in solving the problem of Carbon Emissions. Else we drown in Greenland's ice. 18% ridership or bust!

DISCLAIMER:
No specific individual organizes or runs Critical Mass.
There are no leaders. Anybody can ride.

a lot of us have our thumbs up our asses watching the clock for months, waiting for this oil gusher to stop, dreading the next two decades of dealing with another disaster. Critical Mass is not only something to do, bike therapy, but it simply demonstrates the efficiency of bicycles as petroleum-efficient modes of transport for all practical purposes. We must turn the heads of those trapped in Car Culture. This is more than about the evils of BP, it's about living more efficiently, and treading lightly upon fragile southeast louisiana so that our wetlands don't disappear below a rising sea.

of course, the route is always negotiable, and subject to radical change. please give feedback! or come up with routes. or mis-lead the ride somewhere new and interesting.

Our society's oil addiction is an overwhelming issue. But it can be tackled in million ways-- transport is one way to beat the sauce, to stem the river of oil flowing into our streets. Luckily, we have a proven, efficient technology in the bicycle.

The oil industry a four-point threat to those of us that live, work, and play in Southeast Louisiana, because we host much of the nation's oil and gas infrastructure.

1) In the short term, oil production and refinement--including the regular spills--harms the health of our citizens by poisoning our food, air, and water.

2) In the longer term, oil pipeline canals, which make a spiderweb across south Louisiana, have destroyed our wetlands. These swamps, marshes, and barrier islands are nurseries for our local food as well as our hurricane protection from storms.

3) New Orleans is North America's own "island nation." Refinery emissions and their products foul our atmosphere with greenhouse gases, making Louisiana the most carbon-emitting state per capita in the United States, the world's leading nation for per-capita carbon emissions. Louisiana's damaged wetlands are sinking, and cannot face the stress of the new climate's rising sea.

4) the United States' oil politics have cost our humanity, our military and our economy dearly in the cost of failed wars and displaced peoples. Our obvious oil addiction weakens our relationships with other countries, as a government and as citizens.

What are we waiting for? Louisiana cannot expect to survive, playing the Oil and Gas industries' game. New Orleans is flat and compact and perfect for cycling. We have the potential to be a wonderful city for a clean energy future. We must take the lead if we expect the rest of the country and the world to support our continued existence on the slow-motion Mudslide we call home.

It's obvious this spill will go on past the next two months, but rest assured we will ride through them. and then, through the decades it will take the River and the Gulf to clean up the toxins. Let's show New Orleans the benefits of human-powered transport. Let's make our response bigger than this disaster. Let's show

Please join us in a Ride for our Lives!

Other ride locations in the United States in Louisiana (articles only)

}}
Retrieved from "https://criticalmass.fandom.com/wiki/New_Orleans?oldid=13767"
Community content is available under CC-BY-SA unless otherwise noted.