The first ride took place on September 22, 2004 though it was preceded by at least 50 similar bicycle events initiated either by organisations, groups of bicycle couriers, or other pockets of non-affiliated individuals.

Organisers originally wanted to hold it on Carfree Day, but Mayor Gábor Demszky refused to sanction it on grounds it would fall on a weekday and therefore disrupt commuter traffic (this, or course, being the point of Carfree Day). An insistent group of riders, joined by then Hungarian Environmental Protection Minister Miklós Persányi, went ahead and rode anyway, but the larger ride took place on the following Sunday, according to Demszky's wishes. Attendance surprised everyone, at approximately 4,500. No one could have predicted that this would be a relatively modest start to a phenomonal twice-annual ride.

Critical Mass Budapest has been said to be the biggest in the world -- with the spring 2008 figure reported at 80,000 -- but these figures always originate from organisers, who acknowledge that they are estimates.

Experts have empirical methods of guaging the sizes of normal crowds, but parades of people on bikes are more elusive, according to Gábor Bihari, the editor of the English-language page of the ride's website, [1]. Crowd density is less due to the presence of bicycles and, of course, the Critical Mass procession is continuously moving and in flux, as riders join and leave throughout the ride.

The size of the second critical mass was estimated by extrapolation, said Gábor Kürti, director of the lead organiser, Hajtás Pajtás bicycle couriers [2]. Given that attendance of the first ride was 4,500 and knowing that email queries preceding the second ride were double those preceding the first, attendance for ride number two was put at 10,000.

Though exact figures may be disputable, there's no doubt they are staggering. As best they can be determined, these are the counts of the rides to date: 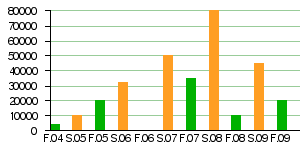 The 2005 Critical Mass rides constituted a real breakthrough for they directed continued media attention toward the events and related issues, and several other Hungarian cities and municipalities began organising their own rides.

Negotiations began with the Budapest City Council, resulting in an increase in the length of bicycle lanes and paths constructed (going from an average of 1-2 km/year to 30 km/year). The planning process now incorporates consultation with experts involved in Critical Mass. Similarly, the Hungarian Ministry of Economy and Transport has created the post of Ombudsman of Bicycle Affairs, and has appropriated a substantial budget for establishing bicycle routes nationwide.

In a March 2006 ride organised in light of upcoming Hungarian Parliamentary elections, Critical Mass participants stopped by each of the four parliamentary party headquarters, lifted their bikes above their heads, and delivered a petition containing recommendations for improving bicycle transportation in Hungary. The event was called “Tour de Voks" (“Tour de Votes"), and each party responded to the petition with its own bicycle program. Critical Mass held the winners to their promises on 2 December 2006, when - despite cold weather – some 2000 bicycle demonstrators protested the government’s budget and development plans, which fell short of earlier promises made for bicycle-friendly transportation projects. Government officials later corrected their plans; the Hungarian Parliament established a “Bicycle" committee and unanimously approved separate line items for bicycle-related projects. For the first time in Hungarian history, Critical Mass was mentioned in Parliament.

The largest ride so far was the April 22 2007 Critical Mass / Earth Day demonstration, which attracted an estimated 50,000 cyclists, including László Sólyom, president of the Republic of Hungary, who – much like a year before – rode along with the participants, rendering unprecedented esteem to an unprecedented turnout in Hungarian as well as international terms. Other prominent individuals included János Kóka, Minister of Economy and Transport, and Gábor Demszky, Mayor of Budapest.

The Budapest City Council gave Critical Mass a Pro Budapest award for their efforts in promoting cycling as an alternative mode of urban transport and improving the transportation culture in the capital city.

Possibly the greatest accomplishment is the fact that the number of people using their bicycles on a daily basis in Budapest has doubled for the third year in a row, a growth rate unmatched anywhere else in the world.

Budapest Critical Mass rides are legal demonstrations in cooperation with the police, in 2006 even the President of Hungary, László Sólyom took part in the event.

Critical Mass rides take place on a weekend day around every 22nd April (Earth Day) and on 22nd September (Carfree day). Also, there is Minimal Mass, a.k.a. the regular rides on the last friday of the month (www.minimalmass.hu).

Community content is available under CC-BY-SA unless otherwise noted.
Advertisement