No news, see De:Neuigkeiten aus Berlin for older entries (only in German).

Critical Mass in Berlin took place for the first time in 1997. After a longer break from 2001 to 2006 there is a new generation who monthly celebrates cycling in Berlin. Informations can be found at the local web site.

Critical Mass started in Berlin in September 1997 with only 20 people and continued with this amount. They met 4pm, every last Friday of the month at the Brandenburger Tor. In 1998 these count quickly raising. In May 1998 there were 300 and one month later over 500 who celebrated riding together. These number decreased over the next years (1999 - 2000). In October 2001 the last CM ride has taken place for a long time.

Critical Mass Rides in Berlin also took place to other mostly political oriented events. There was e.g. a Critical Mass ride at the day of the eviction of the Yorck59 (June 06, 2005) [1]. Other happenings were Reclaim the Streets. [2]

At that time the authorities were also interested in Critical Mass bike rides, so the cyclists were often escorted with bicycles, motorbikes or cars of the Berlin Police. Civil cars were regularly used to observe the Mass too. So some cyclists got fines because accusations of violations against the traffic laws. .

In the media there were some reports of the monthly rides, particularly when rides with many participians took place, in TV, e.g. in B1, "Berliner Abendschau" and in the press articles.

Particularized informations and impressions can still be found on the legendary Critical Mass Berlin homepage, which can be viewed on archive.org, see links.

Critical Mass in the new century[]

Since December 2006 Critical Mass rides have been taking place in Berlin once again, again the last Friday of every month at 4:00 pm. but now at the Heinrichplatz in Berlin-Kreuzberg, one of the Citys most beautiful districts. Since April 2008 the Friday rides have been taking place on 8 p.m. and there are additional rides on the first Sunday of the month at the Brandenburg Gate, 2 p.m.

First ride in Berlin since 2001 with 8 Critical Mass riders

Police checked bicycles and got personal data from some cyclists. One person should have been arrested (source: de.indymedia.org), causes unknown until now. Anyhow Critical Mass started, but only with a few people.

Around 40 cyclists started at the Heinrichplatz, during the ride the count increased up to 60 participiants. There was an incident at the Heinrich-Heine-Straße where the police confiscated a bicycle (later the gave it back) and got the personal data of at least on person. See [3] and [4] for particularized reports of this ride.

Police confiscated a bicycle but gave it back some time later

Cycling around the Straußberger Platz

September 28, 2007 was the 10th anniversary of Critical Mass in Berlin: Rain, rain, rain... Only 20 riders took part. Four cars of the Berlin police should have been present at the starting place to control this ride. See also [5].

After CM hasn't taken place in the last months, on February 29, 2008 only a few cyclists were present at the Heinrichplatz.

The nice weather attracted about thirty people. The route led over mostly small streets in Kreuzberg and Mitte until in the Leipziger Straße the Police stopped the group. After waiting a while in the Leipziger Straße we met once more at the Brandenburger Tor and rode to the Alexanderplatz. Unter den Linden a group of "Berlin by bike" cyclists joined us so after all we raised the fifties limit ;). (Simple translation of the German text)

Best weather conditions attracted only about 25 cyclists at 6 p.m. in Kreuzberg at the Heinrichplatz. Shortly after the Berlin police threatened to check the personal data of the cyclists if the they would ride in a group and later to confiscate the bicycles if anyone would violate the traffic laws. At least no further incidents occured but most of the bicyclists lost their interest because of the credible threat of force. Thus the ride ended after one hour with a few people. While the ride the police reasoned their measures due to the action days for autonomous spaces which took place at the same time.

The chart data can be edited in the 2006-2007 Berlin statistics template.

The chart data can be edited in the 2008 Berlin statistics template.

See also a comparision with other German cities.

On April, 07 2007 the Berliner Zeitung mentioned Critical Mass in Berlin [3]

The German online magazin jetzt.de reports about unconventional protest activities including Critical Mass. The author quotes in the article a post from the Berlin CM blog. [4]

Not all people understand what Critcal Mass means. Though there are no leaders and no fixed agendas of a Critical Mass bike ride there are some things which should be sure riding safely, see Self conception/Selbstverständnis (in German only).

The regularly Critical Mass bike rides in Berlin are not without controversity. General criticism of this form of the traffic participation, the behaviour against the primary thoughts of Critical Mass and the actionism of several cyclists who strengthens the conflicts with the motorised traffic and possible problems with the authorities may be some important ones of it, likewise as the rather actionism character with missing perspectives.

A sorted gallery can be found on the Berlin photos page. 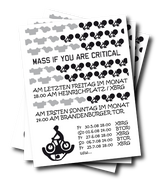 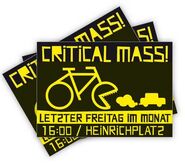 Other ride locations in Germany (articles only)

}}
Community content is available under CC-BY-SA unless otherwise noted.
Advertisement